All You Need to Know About Japanese Beetles

Every year, customers stop in with pictures and samples of leaves that look like a skeleton and rose flowers crawling with beetles. Birch trees, certain linden trees, elms and flowering crabapples start to lose their leaves around town. A prolific infestation is to blame and has quickly become a household name, Japanese Beetles.

Many people do not realize that the beetle started its life cycle the year before as a grub in their lawn. Wreaking havoc above ground, these hungry insects make quick work of over 300 varieties of vegetation while only being active 6 to 8 weeks. During this time, a single female can lay up to 60 eggs. 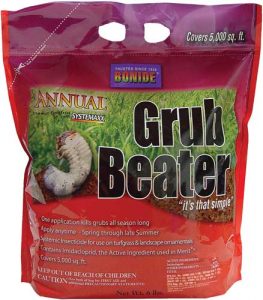 The eggs become grubs and feed on grass roots. This is more noticeable in lawns without irrigation as brown spots are revealed due to the root damage. By the end of September, the grubs are almost full-sized and go deeper in the soil to avoid harsh winter temperatures. When the ground temperature reaches 50 degrees in the spring, the hungry grubs begin to feed on more roots.

To reduce the population of beetles, grubs must be reduced. Bonide Annual Grub Beater is an excellent product requiring one application a year. The granules are easily cast through a spreader. As the plants absorb the systemic insecticide, the grub ingests Grub Beater and is terminated. Due to the life cycle, Grub beater should be put down in May to mid-June, or from Mid-July to early September. For most efficacy, talk to your neighbors and encourage them to also apply Grub Beater every year.

Japanese Beetles begin feeding on plants and trees from the top down. As they feed, more beetles are attracted to the smell of damaged leaves. Adults also release a pheromone telling others to join. Luckily there are many options to fend off these coppery-backed invaders. Bonide Annual Tree & Shrub should be applied in the spring to protect valued plants. Tree & Shrub works systemically to protect from a wide variety of insects including Japanese Beetle and Emerald Ash Borer. Bonide Japanese Beetle Killer works as a fast contact killer and is all-natural, extracted from Chrysanthemums. Bonide Eight Yard & Garden is a contact killer that also has residual protection. Another option that we recommend is the use of Bonide Beetle Baggers. Each kit protects an area over 5,000sq.ft. and lasts all season! Pheromones lure nearby beetles into a trap which they cannot escape from. We eradicated 10s of thousands of beetles ourselves with beetle bags alone last year! 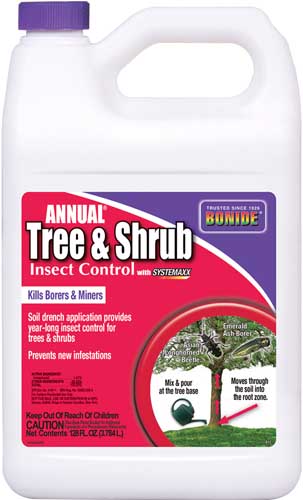 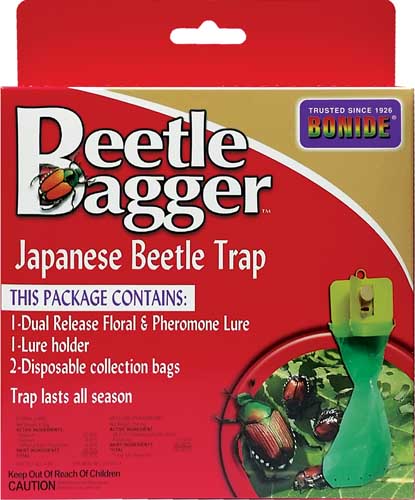 The best way to control Japanese Beetle infestations is to work together and use the correct products. During peak infestation, Jim Whiting Nursery & Garden Center, Inc. always carries plenty of product on hand. Helpful staff will be more than happy to assist you with any further questions or concerns you may have!

BACK TO GARDEN ADVICE